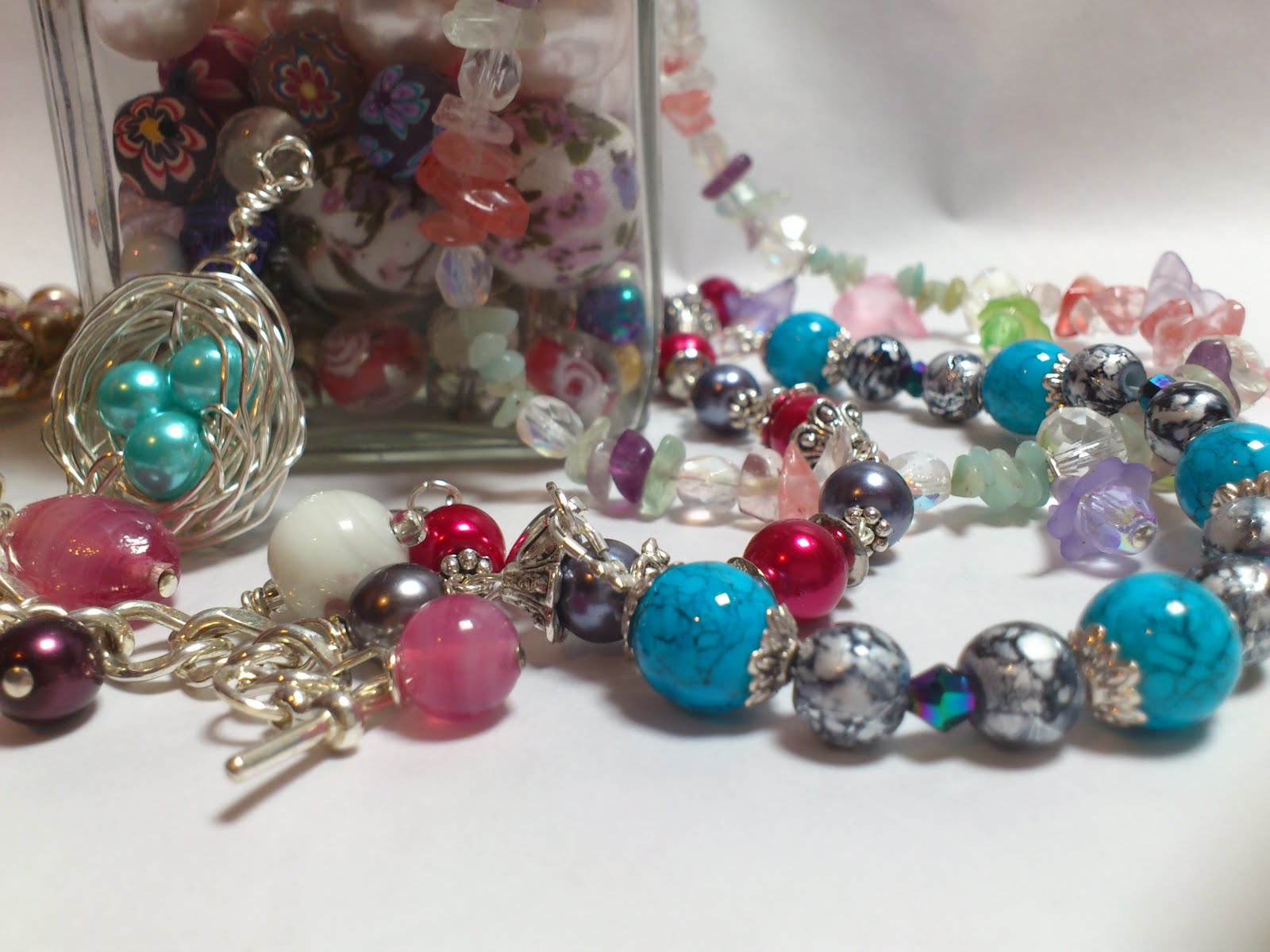 So, I haven't posted in a while, but I have been very busy (well, that might be a lie.) Anyhoo, first things first. Since you last heard from me (many, many months ago) I have become an Auntie! Oh, yes! And I have a feeling that I might already be the favourite auntie. Well, ok, I'm the ONLY Auntie, so I hope I'm the favourite! So, I've been a bit lacking jewellery-making-wise but instead, I've been knitting. Now, I've knitted bits and pieces before (mainly scarves that are never quite finished) and my most successful knitting venture was a few years ago when I started a pair of baby bootees and, well, let's just say they didn't quite end up the same size. Or shape. So, I thought "I have to try harder this time. There's only nine months to go!" and started (and finished!) a gorgeous pink and white stripey hoodie. Look, it even has ears! 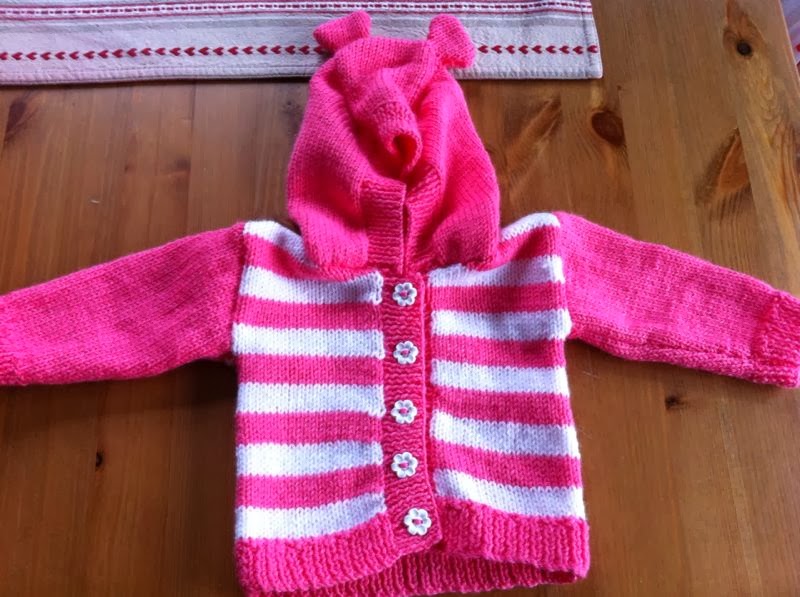 However, I hadn't thought this through since, nine months later, my sister gave birth to The Nephew! And, however lovely and gorgeous he is, he would not like to wear a pink stripey hoodie with ears. So, the knitting pins came out again, this time with BLUE wool wrapped around them, and this was made: 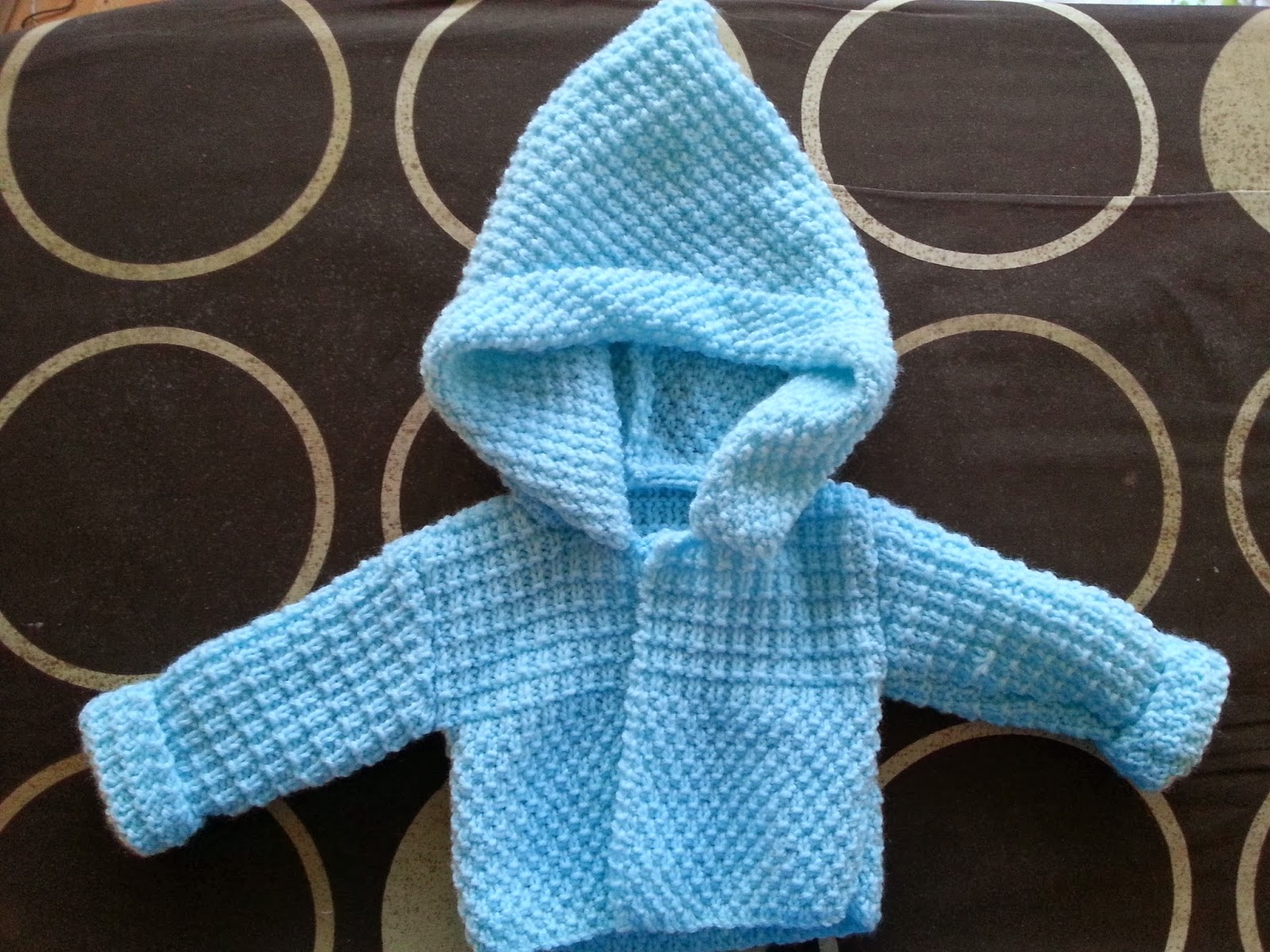 However, no matter how hard i tried, or how fast i knitted, I was still too slow and it ended up a size too wee for The Nephew. Hmmm, this knitting malarky is harder than it looks! So, on to try number three. And, I'll be honest, after knitting up a wee bit of jumper number three, I stupidly left it in a bag on the floor next to my couch and, annoyingly, came home the next day to find that The Cat had destroyed it! So, jumper number three ended up in the bin.

So, I thought, I must have one more go before I through in the towel (or pins, I suppose) and, after a phone call from The Sister telling me that The Nephew had grown too big for his hat, I thought "This is my chance!" and, after several days of knitting (and, basically, nothing else!) attempt number four was finished! 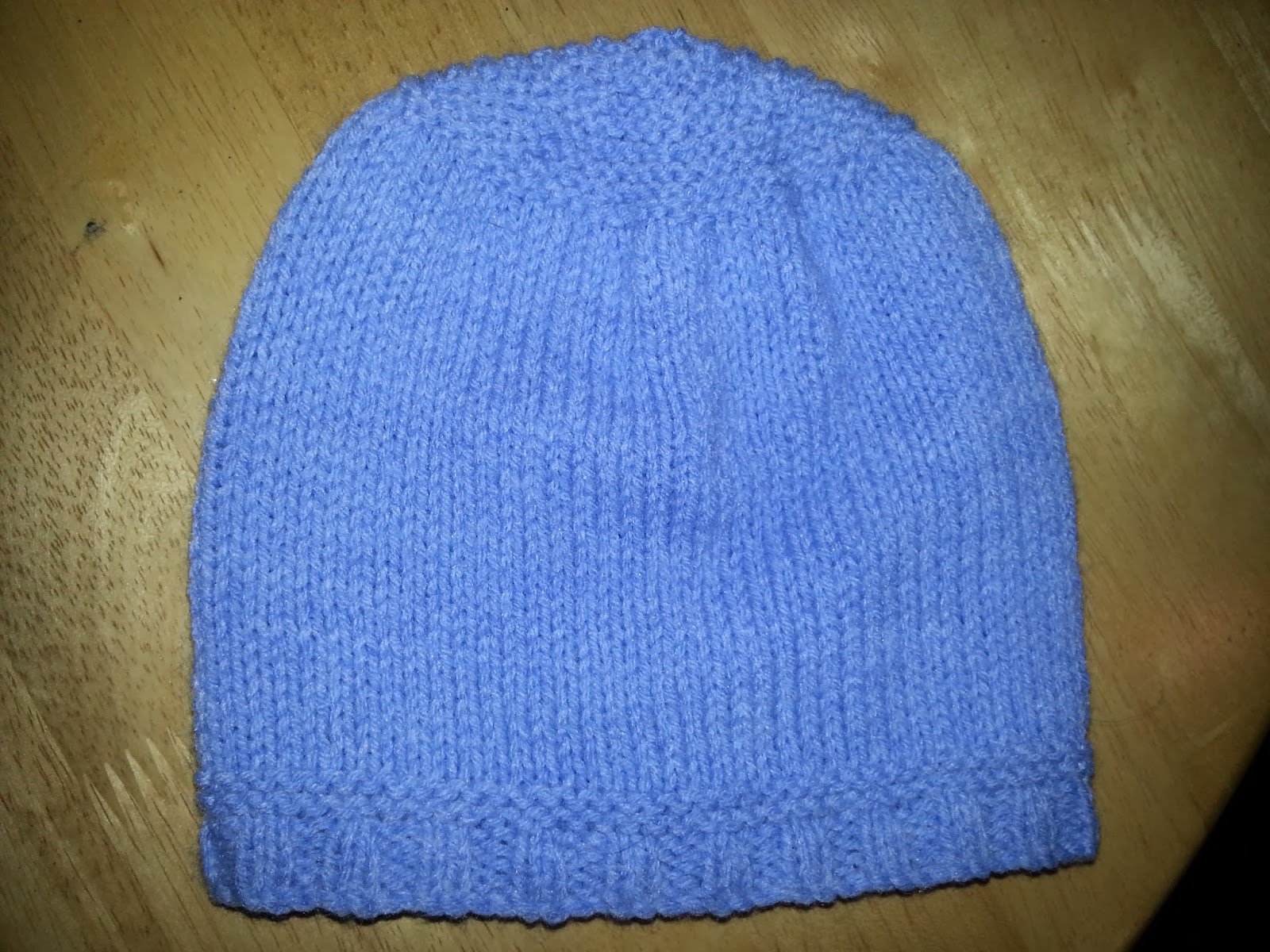 And, even better, it fitted! And was the right colour! And shape! Well, ok, it was a bit big and fell down over his eyes when we put in on. But still, it counts!

Hmmmm...maybe I should just go back to jewellery...
Posted by Rosanagh at 16:49 1 comment:

My VERY FIRST attempt at making a ring!

I have been making jewellery for a few years now and, in that time, I have NEVER made a ring! This is very bad, especially since my blog is called "Ring-a-Ring-a-Rosie"! It's also very difficult for me to find rings that actually fit. My fingers are quite skinny and most rings just fall off. I'm also way too scared to try on rings in shops. WHAT IF IT GETS STUCK?! So, the other day I had a look online for a fairly simple beaded ring tutorial and found this:


This seemed like a pretty good place to start so I raked out some seed beads and got to work. The first ring I made was too small: 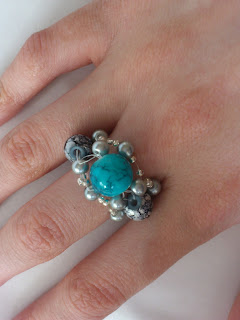 Also, as you have probably noticed from the picture, I managed to break it! So ANNOYING! I really liked the turquoise bead in the middle but I think the two grey beads either side of it were a bit big, so maybe it was a good thing that it broke cause now i can change it!

After this I tried a pink design. This ring was too big: 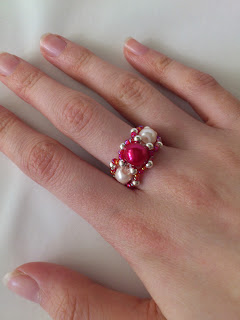 So, I guessed I had one more shot at getting it right before I got way too crabbit and gave up. And it worked! A blue and silver design that actually fit! 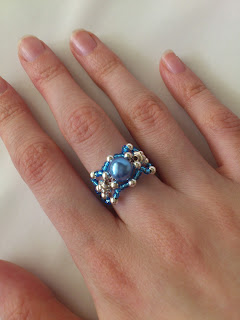 So, after all these years (and a few dodgy sized rings) I have finally made a beaded ring that actually fits! And one that I can keep all for myself!  That is, until my mum saw them and asked if she could have the blue one. Oh well, guess I'll have to make some more!

Last week I finally finished my exams for university. Yay! Now i can spend the whole day making jewellery and not feel guilty! I have lots of ideas that I'm planning to try out and I was going to start today, until I looked outside and saw that we had a (very rare!) sunny weekend here in Scotland! There was no way I was going to waste that sitting inside all day! Way too much gardening to be done! Although i did spend a bit of time this morning making tablet!! 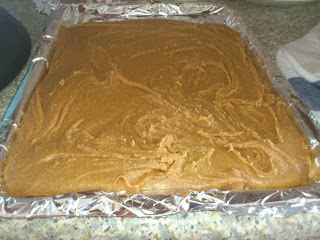 For anyone who doesn't know, tablet is a very famous scottish recipe. It's a bit like fudge, but LOADS better and probably with a lot more sugar and condensed milk! I think i've eaten too much though, as i do feel a bit hyper with all the sugar! However, the best it about tablet, just like anything you bake, is scraping out the pot! And, as you can see, not a bit was wasted! 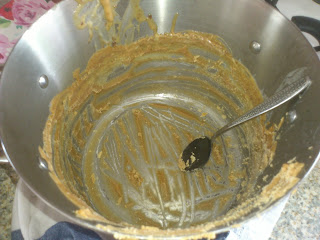 Anyhoo, since i've been busy with exams, i've only made a couple of jewellery items, including this commissioned necklace, bracelet and earrings set. 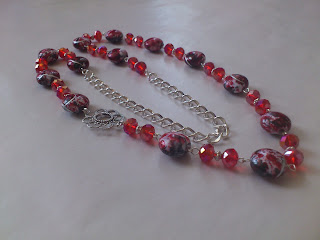 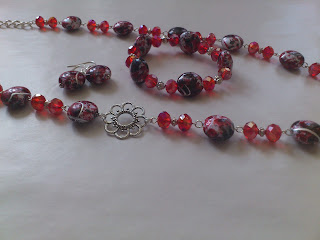 I also have some jewellery ideas up my sleeve and, after looking at all the bead soup entries (thanks to anyone who commented or started following my blog!) i really want to try out more seed bead projects. I've only ever tried the basics and there were so many gorgeous seed bead pieces that i really want to have another go! And, now that I've written it here, I'll have to make sure i do it!

Posted by Rosanagh at 17:01 No comments: 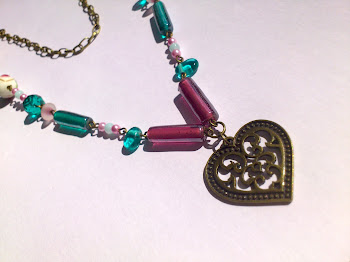 Rosanagh
A wee bit about me. I'm currently a student living in sunny Scotland (well, it was sunny today). I've been making bits and pieces of jewellery for a while so i thought, why not write about it? I sometimes do other things like sewing, crocheting, knitting and a bit of gardening . I just reread this and it makes me sound a bit like an old lady, but i'm not. I'm very cool. 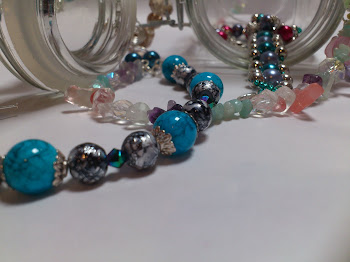